This is one of the most common questions veterinarians get from clients when discussing ticks. Owners sometimes think a lump or bump they find on their pet is a tick. Owners also sometimes confuse ticks with other types of insects or spiders. It is important to understand what a tick looks like. An adult tick has eight legs and is more closely related to a spider than an insect. They have only two body parts, the basis capitulum (which is the head and thorax fused together) and the abdomen. Ticks are flat top-to-bottom as opposed to being flat side-to-side like a flea. They are also very difficult to squish or crush. Ticks are very small – clients are often surprised how small they really are even when they are fully engorged with blood. 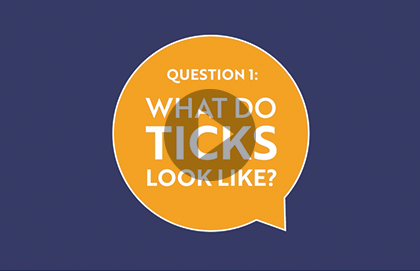 Should I check my pet for ticks?

Checking your pets for ticks is important because Lyme disease transmission tends to take some time (typically 36 to 48 hours) after the tick latches onto an animal or human. Therefore, checking your pet, and yourself, every day significantly decreases the risk of tick-borne illness.

Use the quality time you are already spending with your pet, including petting them, to take the opportunity to feel them all over to check for ticks—feel each of their legs right down to their feet (including between toes and paw pads), check around and under their collars, and in and around their ears. It is important to check every part of their body that is accessible. 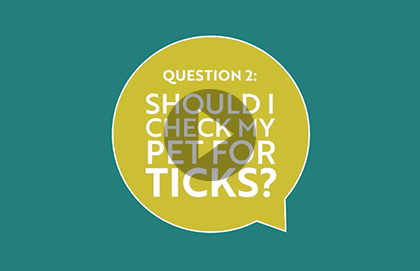 What about “natural” tick control products? 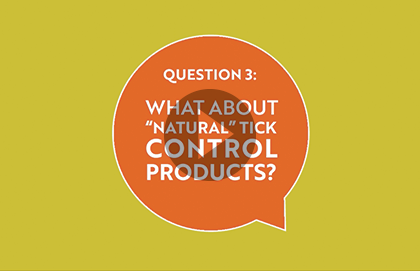 How do I find out what preventative is best for my pet?

Multiple products for both cats and dogs are available. However, many products are not safe for cats. You should discuss your prevention plan with your veterinarian. The different products available work in different ways and it’s important that you pick a product with your veterinarian that you are comfortable using and will use exactly as directed. This will yield the best results.

Where can my pet get ticks?

It’s long been thought that ticks live exclusively in long grass. There’s no doubt you will find ticks in long grass, but Ixodes ticks actually prefer to live in the leaf litter under the forest canopy where there is a high moisture environment.

Typically, Ixodes ticks are found in the leaf litter in the forest, and Dermacentor ticks are found more in the scrub or fringe areas, and potentially in long grass because they are hardier ticks that can live and thrive in drier environments.

Some owners are afraid to allow their dogs to run in long grass because they’re worried about tick exposure. However, allowing them to run off-leash in wooded areas poses a greater risk for picking up a tick and contracting Lyme disease. Therefore, we encourage pet owners to be cautious around long grass, leaf litter in forest environments, and any fringe areas along the edge of the forest as well. 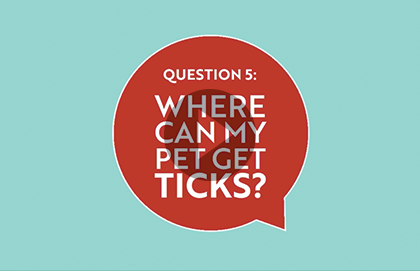 Is my dog or cat at risk for ticks in my own backyard?

This really depends on your own backyard. Nicely cut lawns, with very short grass, pose much less risk. However, the risk is much higher in fringe areas on the edge that go into brush or a hardwood forest canopy. 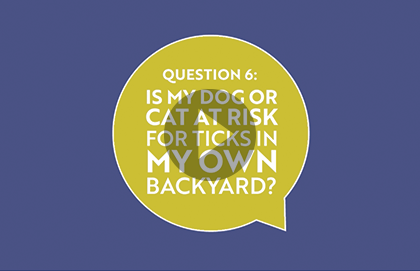 What is the best way to remove a tick?

This is one of the most popular questions asked in veterinary practice. The best way to remove a tick is to take a fine pair of tweezers, grasp the tick as closely to the skin as possible, and pull up gently and firmly until the tick releases itself.

The best method is to remove the tick as soon as possible by grasping it gently, but firmly, and pulling up. 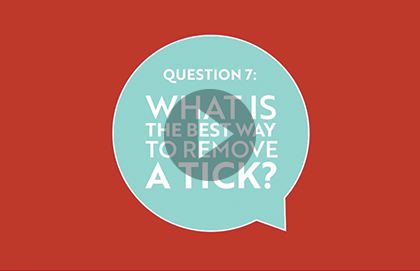 Do cats get ticks?

Many veterinarians see ticks on cats in their practice almost daily. Thankfully, the risk of disease transmission from ticks to cats in Canada is very low at the moment. However, we recommend talking to your veterinarian about tick control strategies available for your cat—most importantly, ensure you use a product that is safe for your cat. 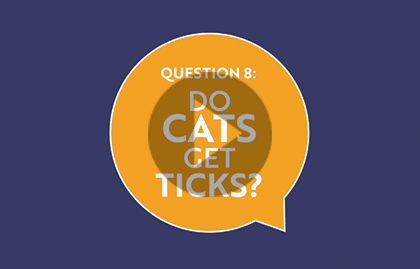 What are the signs of Lyme disease in my dog?

The most common symptoms in a dog exposed to Lyme disease is sudden, acute lameness and lethargy. The dog may not have the energy it did, it may be reluctant to move, or doesn’t want to move at all. Sometimes there will be shifting leg lameness—the dog will have a lame left, front leg one day, and the next day the right, front leg will be lame. There may also be mild joint swelling, reluctance to eat, and a low-grade fever, up to 40.5 degrees Celsius (anything higher than that tends to point to something other than Lyme disease). These signs usually show up two to five months after a tick has fed on a pet. 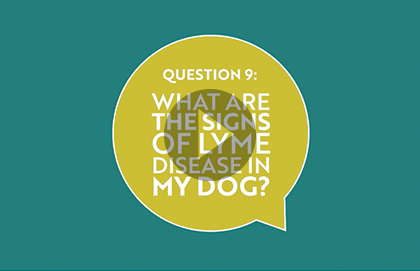 What are the common tick species that we find on dogs and cats in Canada?

There are over 40 species of ticks in Canada. The most common ticks that dogs and cats may encounter are in the Dermacentor or Ixodes species groups, which include the American dog tick (Dermacentor variabilis) and the blacklegged tick (Ixodes scapularis).

However, Amblyomma americanum, also known as the Lone Star tick, as well as the Brown dog tick, Rhipicephalus sanguineus, are occasionally found on people and animals in Canada and are usually associated with either migrating birds dropping them off or with a travel history. 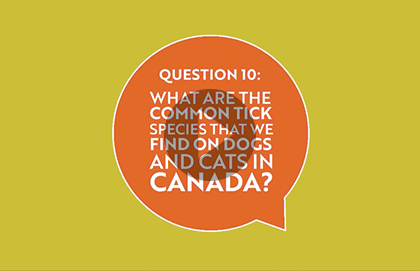 How do ticks develop from eggs into adults?

Each tick goes through three life stages, starting with larvae, then nymph, and then adult. The picture below shows the Ixodes in all its different life stages. The eggs hatch into a larvae, which have six legs and are incredibly tiny, and very difficult to find. The larvae is very small and doesn’t carry Borrelia burgdorferi. The nymph however, is only slightly larger, and is still incredibly small. It has eight legs and does pose the risk of giving you and your pet Lyme disease. And finally there are the adults which are much larger, but are incredibly small even in the engorged state. Of course, adult ticks can transmit Lyme disease. 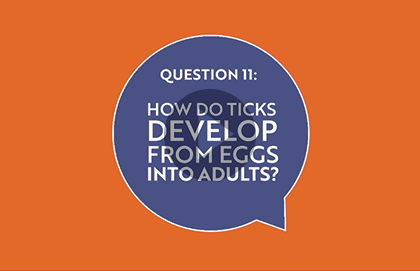 WHEN ARE TICKS ACTIVE?

The adult female blacklegged tick (Ixodes scapularis) becomes more active in the early fall all the way through to the late spring. They tend to be less active in the middle of the winter simply because it is too cold. This tick species becomes active when temperatures are 4oC and above, however, consider ticks active any time it isabove freezing. In fact, it you are far more likely to encounter an adult female blacklegged tick on a mild day in winter than in the middle of summer. On the other hand, American dog ticks (Dermacentor variabilis) are active during longer days and you are far more likely to find an adult American dog tick in the summer than a blacklegged tick. 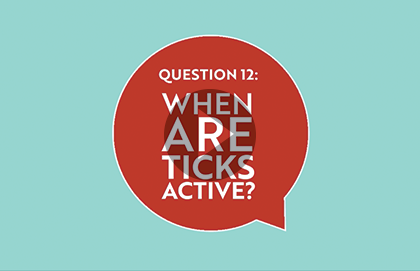 Test your knowledge by taking our quiz!

Contact your veterinarian for more information on tick prevention and awareness.

They can also help set up a tick control program
for your pet.